Why South Africans are Fat but Hungry

About 40% of the population eats food with so little nutrition that they are malnourished – and its affecting our health and productivity.

Food is a big issue in South Africa – we`re the fattest country in sub – Saharan Africa and one of the 20 fattest countries in the world. At the same time, one in four South Africans regularly go hungry, whilst half of us have access to so little food that we are at risk of hunger. Doing the maths, this means that many South Africans then, are both fat and hungry. About 40% of South Africans eat the amount of calories recommended daily but eat food with so little nutrition that they are actually malnourished, according to the South African National Health and Nutrition Examination survey.

“People think of food insecurity as only having insufficient amounts of food, but it can also include not having enough food of sufficient quality”, says Prof David Sanders from University of the Western cape`s School of Public Health. 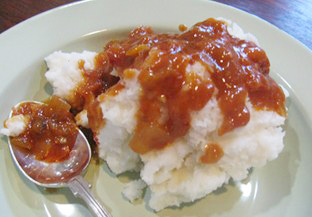 A typical “low quality” meal consists of mostly mealie meal, bread or rice, with very little animal protein or vegetables. The meal is also usually prepared with cheap oil and lots of salt.

This means South Africans, even those who are overweight experience high levels of nutrient deficiencies, including those related to Vitamin A, iron and other minerals and vitamins.

Although all commercially produced maize meal in South Africa must be fortified with micronutrients, three 850g servings supply less than half of the Recommended Dietary allowances of protein and iron, and only about one third of vitamin A.

Close to half of all children [43.6%] have vitamin A deficiency, while one in 10 are so malnourished they appear like children you see in pictures of places where there is famine, Sanders says.

“This is a much more chronic form of under-nutrition where they may not go to bed hungry, but they don’t get enough nutrition from there low –quality diet” Stunting may put children at risk of infections particularly diarrhoea and pneumonia and also may result in “sub-optimal intellectual development”

“They`re not unintelligent, but if you take the population as a whole, on average the IQ`s are being lowered because of this chronic under nutrition, especially in early childhood” Sanders said. Adults on this diet are also predisposed to illness, and are likely to become overweight or obese, which puts them at high risk for diabetes, heart disease and certain cancers.

Poverty is at the heart of SA`s food problems. While the country produces more than enough food to feed all its citizens, many do not have access to the right amount and types of food, according to Laura Pereira Food Lab report on social grants, many people do not have enough money to buy food, whilst others cannot afford to eat healthily, according to Oxfam`s Hidden Hunger in South Africa report. Oxfam is an international non-profit organisation working towards eradicating poverty.

“Poor South African`s are not able to spend money on a diverse diet, instead the only option to facilitate satisfy and alleviate hunger is to feed family members large portions of maize meal porridge that do not address nutritional needs”, said Laura Pereira author of the Food Lab report.

Sanders adds that “energy dense” foods such as white bread, biscuits and processed meats that are high in calories but low in nutritional value, are cheaper than healthy food.

According to Sanders, tackling poverty as well as unemployment and income equality are among the most important solutions to South Africa`s hidden hunger.

However he adds that there are steps the government can take now, including taxing unhealthy food and using revenues to subsidize healthy foods.

We offer a nutritional supplement solution

Back to basics nutritional supplements are the result of 20 years of research.  The supplements are convenient and easy to carry and consume on the job, encourage fluid intake and one product suits all! Safe for all ages, healthy or suffering from an existing Lifestyle health condition, as well as being safe for gluten and lactose intolerant workers.

For over 20 years Back To Basics has been involved in the development of nutrition solutions for South African miners. We specialise in formulating and supplying structured products designed to fit client nutritional needs for their workforces, taking into account existing legislation and clients Corporate Fatigue Management Plan.